Skip to content
HomeCrew Q&A: Kyle Martino on Bringing the Boys Back Home

This Sunday is shaping up to be infinitely more Massive than usual for Crew fans. At 4:30, the Crew face Minnesota United at MAPFRE Stadium with a playoff berth on the line. It’s also the first home game since the recent announcement that the Edwards and Haslam families are in serious talks to buy the Crew and thwart Anthony Precourt’s planned relocation of the club to Austin, Texas. And on top of all that,  some of the biggest names in Crew history will be returning to their professional home to play in a first-of-its-kind Crew alumni game at 11:00 a.m. at the Ohio History Connection, after which the players will tailgate with the fans before cheering on the present-day Crew in an important game to end the regular season.

The man who set the wheels in motion on this major alumni event was Kyle Martino, the current NBC Sports EPL broadcaster who won the 2002 MLS Rookie of the Year, the 2002 Lamar Hunt U.S. Open Cup, and the 2004 Supporters’ Shield as a member of the Crew. (As Kyle notes in our discussion, former teammate Dante Washington and Linda Logan of the Columbus Sports Commission took over the nitty-gritty details from there, so let’s not overlook their heroic efforts.)

Kyle and I scheduled a quick 15-minute phone conversation between meetings this afternoon to preview this weekend’s events, so here’s what he had to say.

Sirk: Time is short, so let’s jump right in. What was the genesis of this alumni event for you?

Martino: “The genesis was really the #SaveTheCrew folks. They reminded me how special my time was there. When they started to mobilize as a group and express discontent and find a cogent but strong and resilient way to say that we’re not moving, a lot of us former players started getting on back channels and just commiserating. Like, ‘Man, I wish there was something I could do. This is hard to watch.’ For me and others, Columbus made my dream come true. My first professional contract, my first trophy at the professional level, some of the closest friends that I still have to this day, so I think the message from everyone was, ‘Yeah, I’m not really sure what the answer is.’ So I sent a tweet out that was only kind of half-baked just to sort of take the temperature. Like, ‘Who wants to just go back?’ We should just go back and stand with everyone. This would say that we’re upset too, but if this goes the wrong way, let’s have one last run here. One last dance. Let’s remember the good times and share a really special moment even if it’s mourning the loss of a great club. Let’s find a time where we could all come back and get together and find a silver lining and make it a positive experience.

“My hope was that that statement and willingness—and by the way it was a 100% success rate in terms of the players I reached out to, who all said, ‘Of course man, I’ll be there’—we just hoped that us showing up would have a little bit of an effect, knowing that there’s no one thing that was going to reverse this, and we’re not taking any credit and we don’t deserve any credit, but we just wanted to try to do our part. If it had any little part or added to what was already a really impressive and inspiring movement and got things pushed in the right direction, then great. The good part of this is now it’s a celebration rather than trying to find the good in a very bad moment.”

Before that first rally last October right after the announcement, I’d heard from so many former players and one of the things I told the fans at the rally is that many of the players they rooted for in the past are now rooting for them. This event seems to be further proof of that.

“Listen, I love the sport whether I played professionally or not or whether I ever played in front of one fan or not, I was always going to love it and I was always going to play it. But my relationship with the game was special because of the fans. I wouldn’t have had a job without them. They made my dream come true. There are still some fans there that I still have a relationship with. There’s an amazing young kid named Kyle Yoder who’s there who I’ve stayed in touch with. He was a little kid and now he’s an adult and doing some amazing things. But whether it was American Outlaws or the Columbus Crew fans, I feel like a fan now that my playing days are over, so I feel like one of them. I will forever be grateful for what they gave to me in my professional career.

What was the process of getting these guys together? You said it started with a tweet and some back channel discussions, but where did it go from there? It’s quite an event to pull together. 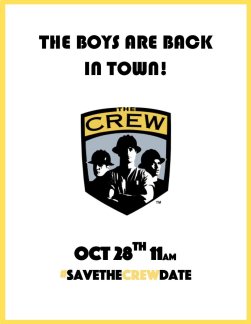 “It started like a bachelor party. It’s like, ‘Alright, where do we go? What are we doing? How do we do this?’ I realized very quickly that it got a lot of positive answers and a lot of guys wanting to come. I haven’t been to Columbus in a while and I knew it was going to be too difficult to put this all together, so I reached out to two of my good friends and old teammates who are local, Dante Washington and Tom Presthus, and we had a few initial brainstorming conference calls and that got the ball rolling. That took it from an idea to an event that was feasible. It got a lot of support locally.  Linda (Logan) from the Columbus Sports Commission and Dante Washington deserve the most credit. The event would not be going on if it weren’t for the two of them being boots on the ground literally walking fields and figuring out how to make this happen.”

So how many people are coming back to Columbus? I see #SaveTheCrew has been teasing it out and releasing names throughout the week.

“What’s funny about that is it could be 15 or 30. I’m getting some last minute texts and emails from people I’d lost contact with and they said ‘I saw saw everyone’s coming back. I’m coming too.’”

I see from twitter that you’re involved with your street soccer stuff, so you might be ready to play, but how prepared are you and what are you expecting from this alumni game?

“I’m expecting five minutes of beauty and the excellent nostalgic feeling of being on the field with some of my favorite teammates like Edson Buddle, John Harkes, and Brian McBride, and then some amazing Columbus players like Stern John that I looked up to and were idols of mine that I never got to play with. So I’m looking forward to up to ten minutes of great play from talented players which will deteriorate as the old man stuff starts kicking in.”

Is Mike Clark on your team or are you worried about Clarkie thumping you?

“There are only two players in Crew history that I am terrified to play against, and those are Clark and Lapper. I don’t have to worry about Lapper, but Clark, I’m not sure if he’s on my team or Dante’s team yet, but if you look back at the Open Cup victory photo with Lamar holding the trophy, Clark is doing a Jose Mourinho eye gouge on me.”

Well, hopefully if you’re on the same team and win the alumni game, he does not do a repeat of his 2002 celebratory eye gouge.

“Let me just go on record right now that I will not take another victory photo with Clarkie.”

So you guys are doing the alumni game, and then what’s next? Are you just tailgating with the fans then?

“Yeah. It’s just about getting together and seeing some of the old guys and play for a bit, and then just enjoy our time with the fans. We can relive the glory days with them and then go inside and watch the boys play. One of the things I wanted to make sure when we were starting this was that we don’t want to detract from the team. It’s their last game of the season, so once all of our ceremonies are done, it’s all about supporting the boys.”

What was your reaction the other week when the news broke that Dr. Edwards and his family, as well as the Haslam family, are in serious talks to keep the Crew in Columbus?

“If I could give a sports analogy, it was the completion of a miraculous comeback with a last-minute goal in injury time. It felt euphoric. It felt amazing.”

As a former player, how hard has the last year been? I’ve talked to a lot of guys over the past year and it’s been interesting to hear how personal this has been to them since it’s a club they’ve played for and it’s meant a lot to them over the years. It seems it’s been difficult from an alumni player perspective.

“My career ended early. I had a career-ending injury and had to stop playing at 28, so I struggled a lot with how my career ended and, in my opinion, not fulfilling my potential and achieving some of the things I set out to achieve, and one of the things I never got to achieve was that I never got to bring my children in my arms out on to the field at Crew Stadium. This is kind of an amazing moment to be able to come back and do that. The last year has been really hard. There’s even a political side of it for me, because when I was running for U.S. Soccer president, I was asked constantly about this issue. It might not have won me any political points from people I needed support from to win the presidency, but I refused, when it came to the Crew, to do the political calculus. I spoke from the heart and said I was incredibly disappointed in what was happening. I said I thought that it was in the interest of everyone that the Crew stay in Columbus.”

I know you have to get going, so I guess do you have any last words for the fans heading into Sunday’s festivities?

“I can’t wait to see them again. I’ve got shorter hair now and this time I can actually drink. I’ll see everyone at the tailgate!”

Email: sirk65@yahoo.com
Twitter: @stevesirk
If you wish to support my writing, please consider becoming a patron at my Patreon: https://www.patreon.com/SteveSirk