Skip to content
Home[Pt. 3] The Chad Way: Reflections on a Columbus Soccerballing Legend

Chad Marshall is a funny, funny man who loved and cared about his teammates. Those players describe the real Chad Marshall as “a big goofy animal” and “a teddy bear.”

“He’d always make you feel welcome, but once you were in with him, the banter was pretty much nonstop,” Williams said. “A cool feature about Chad is that he was so self-deprecating with his humor. As good as he was, you never felt like he was big-timing you at all. As much as the banter would be about other people, he was one of those guys that was always able to laugh at himself.”

In early 2011, Stanford quarterback Andrew Luck was at the same crossroads faced by Marshall seven years earlier. As the likely number one draft pick, Luck had to decide whether to go pro or return to school. Unlike Marshall, Luck opted to head back to Stanford for his junior year. Hesmer still chuckles over Marshall’s reaction to the news. “He said, ‘Andrew Luck won’t leave school for 40 million. I left for 40 thousand.’”

Marshall kept things light in the locker room through various uninhibited antics. He was known to break out the Carlton dance when a good song came on the radio. If a Whitney Houston song came on, Marshall would not only dance—or wanna dance with somebody—but he’d joyously sing along as well. A favorite prank of his was to put on the clothes of a much smaller teammate while that player was in the shower. The player would emerge into the locker room and find Marshall looking preposterously overgrown.

Famously, Marshall punctuated victories with a celebratory naked cartwheel for his teammates.

Personally witnessing the sight of a giant man performing nude gymanstics could leave bystanders unsure of the reliability of their own ocular faculties. As O’Rourke said, “The naked cartwheel will go down as…was it real? Or was it fantasy?”

Back when the Crew’s annual team awards ceremony was a public event with players and fans, Marshall made the most of each evening by arriving with Oughton as the duo dressed in outlandish thrift store threads. One year, Marshall talked Oughton into a denim suit. Another year, Chad found sufficient items to evoke Ron Burgundy, while Oughton wore a pink jacket with the word “arrogant” down the sleeve.

“It was always our goal to go to the thrift store and to spend under a certain amount of money and come away with an outrageously awesome outfit in our own minds,” Oughton said. “I don’t know that the powers-that-be were amused by it as we were…but then Chad would win defender of the year and team MVP and all this stuff, and you had to respect it because he was defender of the year and he’s dressed as Ron Burgundy. It was just Chad’s way of saying. ‘I may be defender of the year, but I’m just a normal dude.’ It was pretty cool.” 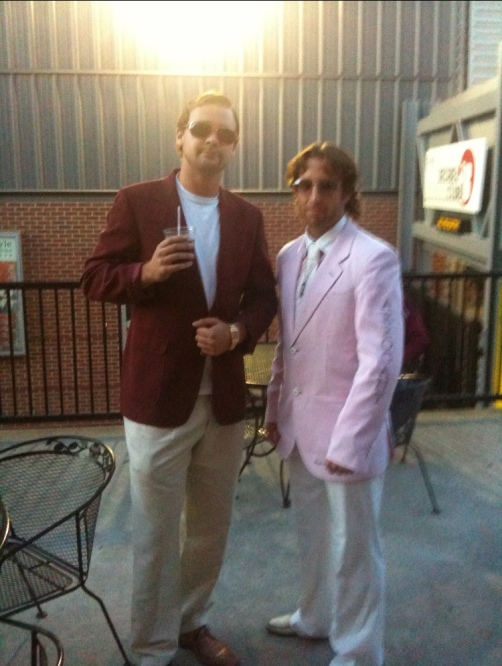 If you were only exposed to certain parts of The Chad Way…maybe you saw some body language during a game, or maybe you saw a disinterested media interview, or maybe you heard him talking about how it’s just soccerball, or maybe you saw various silly antics in the locker room…any of those things could paint a portrait drastically different than the man as a whole.

“I think misunderstood is a great word,” Gehrig said. “His body language wasn’t always good. The guy never self-promotes himself. He doesn’t care about media. All he cares about is relationships, and at the end of the day, that stuff pays off big time. He was on winning teams non-stop. Obviously he cares about performance, but he also realizes that relationships and building up that locker room is a big part of winning and a big part of culture. Chad’s a big part of that and you would never really know that on the outside looking in.”

“Most players can’t turn it on and turn it off like he can,” O’Rourke said of Marshall’s many Chad Way facets. “I think he got a bad rap that way because maybe people thought he didn’t love the game as much as he should. That always baffled me. He was a perfectionist. It came natural to him and he was good at it, but he worked at his craft.”

“He’d dumb it down,” Oughton said, “and as disheveled and sleepy as he may have looked before a game, he wanted to win more than the next guy out there.”

“First and foremost, he was a human,” Hesmer said. “He was a person. Soccer wasn’t going to define him and soccer wasn’t going to be his everything. I think that offended some people. People would be like, ‘You’re not giving everything to this game’ and he’d say ‘I absolutely am, but it’s still a game. We’re playing a game.’ Now you hear all of his buddies, and even (Seattle coach, Brian) Schmetzer said it, he’s a great reminder to us that when things are going crazy and not going well, ‘Hey guys, chill. We’re playing a game for a living. We’re in a pretty good spot.’”

“I mean, obviously we’re all here to compete and win championships,” Gehrig said, “but Chad also really enjoyed life. I used to go over his house and he’d grill steaks for me and we would drink wine and enjoy each other’s company. Those are some of the best memories I’ve ever had in my career and they weren’t even on the soccer field.”

Steven Lenhart, who was a rookie during the MLS Cup championship campaign of 2008, benefited from Marshall’s tutelage by not only sharing a locker room, but also going against him in training every day.

“Chad taught me everything I needed to know if I wanted a chance to play in this league,” he said. “He is so generous and fair and lighthearted and intense. And I always loved just talking about nothing with him.”

“People don’t understand who Chad is as a person,” Williams added. “He’s goofy but he’s incredibly smart. He’s also passionate about his friends and his teammates. He’s one of the best teammates I ever had.”

“Everybody loves him,” Busch said. “He’s a great teammate in the locker room and he was a fantastic player. I think that’s why you’ve seen the response of all the players he’s played with, whether it was Columbus or Seattle.”

Now that he has retired, there has been some internet clamor to rename the league’s Defender of the Year Award in Marshall’s honor, akin to the Landon Donovan MVP Award and the Sigi Schmid Coach of the Year Award. Three different players blurted out the phrase “no-brainer” when presented with the idea. After all, Marshall won the award a record three times and was in the conversation most other years.

“No-brainer,” added Hesmer. “It should be done immediately. They should not waste any time renaming it the Chad Marshall Defender of the Year Award. It’s guys like Chad that could have gone to pretty big leagues but turned it down because he wanted to be a part of this league. He turned down more money. He turned down opportunities to further his own personal career. He wanted to be part of growing this league and making it better. I think it would be great thank you and honor.”

One of the most staggering things about Marshall’s career, apart from the resume itself, is that it didn’t follow the normal development and aging curves. In his rookie season of 2004, he was a stalwart starter on a Supporters’ Shield winner. In his final full season in 2018, he was named to the MLS Best XI team. In between, he won a whole bunch of titles and awards. Most careers have an ascendancy, a peak, and a decline. Marshall’s 16-year MLS career was virtually coast-to-coast peak.

“Consistency is the most impressive thing,” Hesmer said. “I don’t think you can find one bad year.”

“You don’t see too many careers like Chad has had,” Maisonneuve said of the prospect of naming the league’s top defensive honor after Marshall. “I think it’s something that would be justified. The longevity and the level, he’s definitely earned that discussion, that’s for sure.”

Regardless of whether or not they eventually name an award after him, there’s no denying that Marshall had himself one hell of an impactful career in Major League Soccerball, and he remained true to himself while doing so.

Email: sirk65@yahoo.com
Twitter: @stevesirk
If you wish to support my writing, please consider becoming a patron at my Patreon: https://www.patreon.com/SteveSirk

A MASSIVE SEASON is now available as an ebook.